Can someone help me change the default markdown spacing between a list item bullet and its content? It’s currently set to three spaces (who does that?), while I only want one.

I’ve looked at the Codacy documentation around this, but I still find it unclear. I’ve tried various combinations of things in my .codacy.yml file to no avail. For example:

I’ve tried many other options, like remark-lint instead of remark-stringify, and one or 1 for listItemIndent. I’m starting to pull out my hair. Help?

Hello @humblehacker, and welcome to the Codacy Community!

I’ll assume that you’re not using a remark-lint configuration file on your repository (let me know if this isn’t your scenario). In this case, you can change the code pattern directly on the Codacy UI: 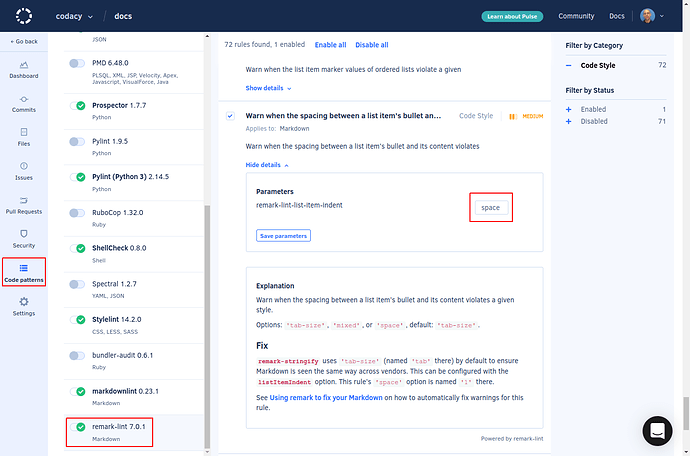 Having explained this, my personal recommendation is to turn off remark-lint and use the tool markdownlint instead:

Just one final remark regarding why it could be preferable to indent the content using 4 spaces as explained on the markdownlint docs:

Indenting by 4 spaces is consistent with code blocks and simpler for editors to implement. Additionally, this can be a compatibility issue for other Markdown parsers, which require 4-space indents. More information: Markdown Style Guide - Ciro Santilli and Marked: Discussion.

Let us know if this helps!

Thanks for your detailed reply! Is there no way to make this change in .codacy.yml?

The .codacy.yml is the Codacy configuration file, which allows performing some advanced configurations but not configuring the actual code patterns of the tools.

What you probably want to do is to use the specific configuration file for remark-lint: 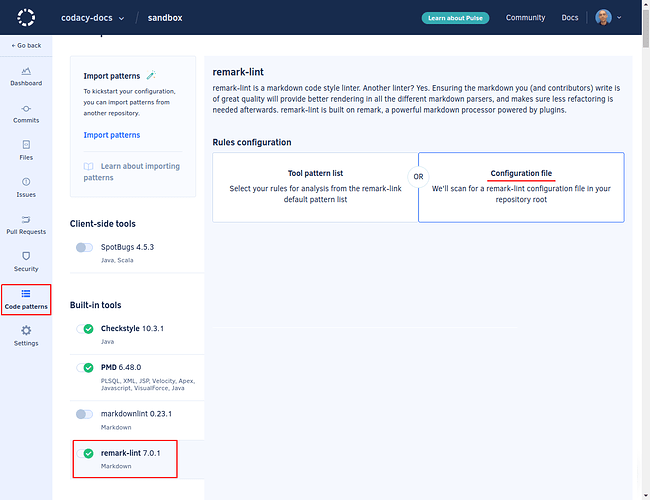 With remark-lint, actually setting up the .remarkrc is once again the tricky bit.